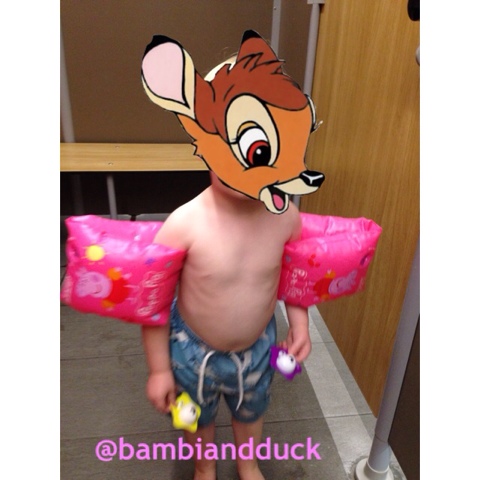 Since we moved "home", we are a bit shorter of things to do than we were in London. Fewer friends and far fewer toddler groups has led us to the natural conclusion of going swimming A LOT. We've been at least once a week since we arrived and while the hassle of changing two wriggly children is still a hassle, it's actually getting easier!

A couple of weeks ago I would've flat out refused to take 2 under 3's swimming without a ratio of 1:1. I just didn't see how it would end in anything other than certain drowning. But one of my new friends (who I made by saying "our kids are the same ages as each other and you seem nice, can I have your number?") invited us swimming in a new exciting pool with toys. She promised there was a large very shallow bit the babies could sit and splash in. It was a 2:4 ratio which made me a little bit terrified but the splashy sitting down bit swayed me and off we went.

The turning point for me agreeing to this was my favourite purchase of 2014: Peppa Pig armbands. Oh my god, how did we go swimming without arm bands? Bambi used to cling to us for dear life in the pool and now he's off on his own, splashing and floating, kicking and jumping and loving it. Such a game changer!

Buoyed (see what a did there?) by the success of 2:4 swimming and having seen the ease with which my new friend managed, I suggested to another new friend we go swimming with her (single) toddler. This time a  2:3 ratio seemed more than manageable! It was brilliant! I put Duck in a rubber ring, Bambi had his armbands and it was actually easier for me with 2 than my poor friend with her younger, arm-band-refusing toddler! 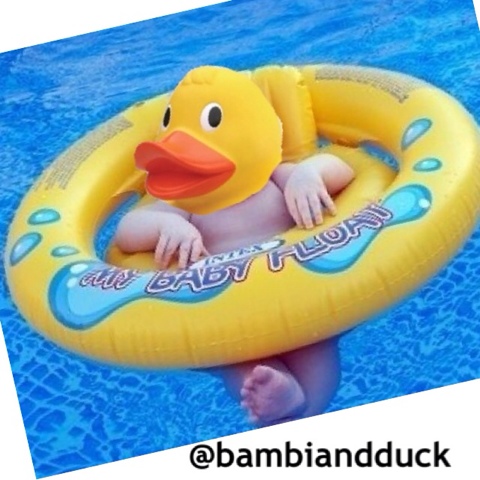 There was a SLIGHT incident involving Bambi refusing to get out of the pool after I'd already dried Duck (poolside towels are the way forward to reduce cold crying baby tantrums). But I swiftly sorted that out by asking the swimming instructor to firmly tell him it was time to go.... He called our bluff and carried on splashing until she jumped in, IN HER CLOTHES, and removed him!

Other tactics I have started employing (other than cajoling fully clothed women into wrestling my son out of a pool) are:

Snacks. I need at least 3 fruit purée pouches per trip. Mostly to stop Duck from attempting to breastfeed while I'm getting us all dressed again. Last time I was putting his top on on a change table, turned to talk to Bambi and Duck had pulled my swimming costume aside and latched himself on for a feed! Swimming = hungry babies, so now before anyone gets dressed we all restore our blood sugar levels with fruit pouches.

Trunks. They used to have wetsuit style swimming costumes which were a faff to get on. Now it's trunks and surf shorts all the way. Any time shaved off the changing process is beneficial.

No toys. We used to take a ball or some floaty toys with us. I thought I was being super fun but it's actually way better without! With my new streamlined approach to swimming there aren't enough hands for me to carry toys to and from the pool. Also, toys can be fought over, taken by another kid, lost and forgotten. No toys, no hassle!

No lockers. No time, no spare change and not enough hands for lockers. These days we don't take anything valuable into the pool and our (one!) bag is a giant Tesco shopping carrier which comes poolside. Soo much easier than squishing everything into the ridiculously narrow lockers.

In general though, times they are a'changing. I can take both my children swimming! This is not something I thought I would be able to say before they were school aged. So maybe, just maybe, it's getting easier to be a mum of 2.